Children and Trauma:
Reflections on the World Trade Center Disaster 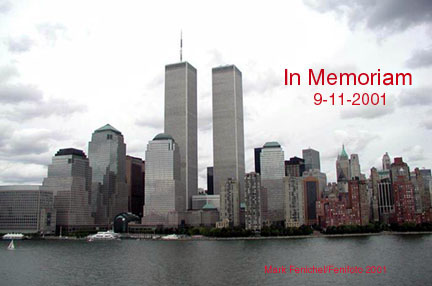 LONDON (Reuters News, September 11, 2001) - In scenes worse than a disaster film, three hijacked passenger jets slammed into the World Trade Center and Pentagon on Tuesday killing untold numbers of people and robbing a nation and the world of its sense of safety.

Trauma experts and psychologists said survivors of the catastrophe and relatives of those killed in the disaster would never be emotionally the same again.

For millions of others who watched the carnage on television the harrowing images will be imprinted forever in their memory.

This reference page was created in response to the events of Sept. 11, 2001. A decade later the world is more connected and still suffering greatly from both natural and made-made trauma. This small contribution was intended for mental health professionals, teachers, parents, and the "walking wounded" everywhere following the events of 9/11, in New York. The references which remain provide information on the general nature of trauma and the challenges of (human) recovery following disaster. Psychology: Resilience, hope, trauma, numbness and despair, interpersonal connections, altruism, love, anxiety and loss - all the elements so widely seen and felt in the aftermath of trauma and disaster. FEMA, Red Cross International, WHO, and other organizations offer specialized disaster response training, whereas these resources are meant for educational purposes only, and as tools for mental health professionals working with trauma. Having now witnessed traumatic experiences far beyond New York, from terrorism to tsunamis, in Africa, the Middle East, New Orleans, India, and Haiti, to name a few recent places with widespread trauma, it is clear there is a need to understand what is indeed normal when daily life is suddenly not normal. For those who wish to understand the nature of trauma or the reaction to it on Sept. 11, this page remains alive, as a tribute to hope and courage and human resiliency.


Age-Related Reactions of Children to Disasters
An excellent overview of how a child's age affects response to disaster. From the NY State Education Department's Crisis Counseling Guide for children and families.
http://www.emsc.nysed.gov/crisis/counsel.htm

A Guide to Children's Grief*
*The original article is gone, but this is PBS' updated page with a video discussion on signs and supports for children's grief. (PBS)
http://www.pbs.org/parents/whenfamiliesgrieve

Helping Children and Adolescents Cope with Violence and Disasters
An excellent discussion of what trauma is, how it impacts, and how it can be treated.
(National Institute of Mental Health)
http://www.nimh.nih.gov/health/publications/trauma-listing.shtml

Nightmare Response
A Mini-course for Clinicians and Trauma Workers. on Posttraumatic Nightmares
http://www.asdreams.org/magazine/articles/seigel_nightmares.htm

Psychologists: Attacks Will Leave Deep Scars
The world has become "an alien place" for many, with lasting impact predicted.
(Yahoo/Reuters)
http://www.fenichel.com/yahoo-wtc.shtml

TalkPsychologyLive - Radio Interview (9-14-01)
Live discussion of crisis and trauma in the aftermath of the attacks (Fenichel/Kraus)
http://www.fenichel.com/media/talkradio.wma

At least 11 students in California were under arrest and several other were suspended for making threats -- serious or otherwise -- to outdo Monday's shooting spree at Santana High School in a middle class suburb of San Diego. In Pennsylvania, a 14-year-old girl was arrested on Wednesday after allegedly shooting a female classmate in the cafeteria of their Roman Catholic high school. Incidents reported in California on Wednesday ranged from a 17-year old spotted in an Orange County school parking lot with a reproduction of an M-16 rifle to two teens in the desert resort town of Twentynine Palms accused of harboring a gun and a hit list of 16 classmates. In the San Diego area, sheriff's deputies were posted at all 12 high schools in the district comprising Santana High, and seven sheriffs were on full time duty at Santana High itself as classes slowly resumed.(Yahoo!/ABC News)

March 22, 2001 - ANOTHER SCHOOL SHOOTING! In a school with an elaborate "school safety plan". It is imperative for school leaders to understand that we can't offer a safe and secure learning environment for children and adolescents unless the causes and warning signs of violence are addressed. Preventive mental health services in schools need to be taken seriously. Turning schools into armed camps is not the answer. An ounce of prevention...

April 24, 2003 - Eighth grade student in Red Lion, PA kills school principal and then himself...
Were there Warning signs?

As the U.S. news media was focused on moral dilemmas and steroids, in Red Lake Minnesota a teen killed a relative, took his police car, and proceeded to Red Lake High School where he went on a killing spree with his collection of guns and body armor. The reports were that despite his circumstances and many warning signs, nobody among his peers in that close-knit community, reported the talk about violence to authorities.

Nine people died as a bright but troubled boy, coming to grips with culture and life, lashed out. His father committed suicide and his mother died in an accident. He shared his anguish and anger with a great many people online and f2f, before he began his rampage of death. Amazingly, this terrible event barely made the news, nor did it draw the attention of national leaders, as in the distant days of Columbine High School, when such violence captured America's attention for some years, and was seen as a symptom of a serious problem growing to epidemic proportions. Now it seems that violence among children has been crowded out by daily stories about war, morality, politics, and baseball. But this is real daily life for many adolescents in America. This is not new. Remember "Columbine High School"? Scroll down for the original focus of this page prior to Sept. 11, 2001: the growing alienation and anger and ease of acting upon it violently among teens. In 2000, APA and MTV were trying to spread the message: there are WARNING SIGNS!!

Why is school violence emerging again? It is.

Were there no warning signs? What can we learn, and what can we do?

Articles and resources on the impact of school violence and other violence on children.
(Fenichel)
http://www.fenichel.com/violence.shtml

How to Find Help For Life's Problems
Online information and brochures from the American Psychological Association's consumer Help Center.
http://helping.apa.org/